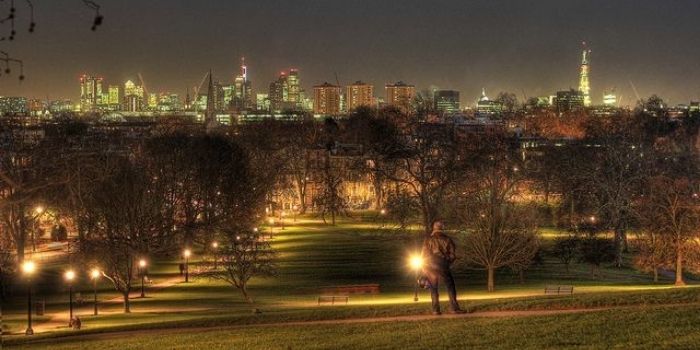 Primrose Hill is a grassy hill on the northern side of Regent’s Park with stunning views overlooking London.

The picture-postcard view of the capital’s skyline might be your top reason for visiting Primrose Hill – but it shouldn’t be the only one. This well-kept annexe of Regent’s Park is also surrounded by posh cafés and shops. And when the sun starts going down, it really is all about that view, so pack a picnic, invite some friends and play ‘spot the landmark’ as London is bathed in awesome orange light.

Up until the 19th century, Primrose Hill was no more than just a woodland area filled with trees and wolves, and it was even once used as a hunting ground by the English monarchs. It is believed to have been named Primrose Hill due to the number of primroses which once grew here; (although not much of them can be seen today), but some experts believe it was named after Archibald Primrose, who was famous for the expansion of the London underground.

Throughout its history Primrose Hill has changed very little, and just strolling around its surrounding streets you will feel as if you’re walking around a London village during the 20th century.

Today Primrose Hill is a highly desirable place to live among the rich and famous, and some of the many celebrities who once lived (or still live) here include Sylvia Plath and Ted Hughes, Dylan Thomas, Boris Johnson, Kate Moss, Gavin Rossdale, Jude Law, and many more. As a matter of fact, Primrose Hill became so famous because of its famous residents, a group of London-based celebrities like Kate Moss, Davinia Taylor, Ewan McGregor, Sadie Frost and Jude Law became known as the “Primrose Hill Set” during the 1990s.

At the Primrose Hill summit lies a York stone which is inscribed with a William Blake quote, as well as the famous “Shakespeare’s Tree.” In 1864 an oak tree was planted here to celebrate the 300th anniversary of Shakespeare’s birth, although the tree that stands there today is a replacement tree which was planted in 1964.

Not just limited to Primrose Hill, walking around its surrounding streets is a highlight in itself, as many of the streets, buildings, homes and pubs have been left untouched for many years, giving a very unique, architectural feel that is unlike any other in London.

Famous People Who Once Lived in Primrose Hill

A lot of visitors head to Primrose Hill to do some celebrity-watching, as many famous names are known to both live and visit in and around Primrose Hill. Some of the many houses which were once lived in by famous residents have been marked with English Heritage blue plaques such as:

Visitors can also easily walk to the nearby Regent’s Park, ZLS Zoo, and Camden Town, and by walking through St. John’s Wood visitors can cross the famous Abbey Road, and even see Abbey Road Studios. There is also a Primrose Hill market which draws both locals and tourists to the area every Saturday.

Where to Eat and Drink Near Primrose Hill?